Although SealWatch.org has previously supported native subsistence hunting in Alaska, the current proposal before Fisheries and Oceans Canada contemplates the "harvest" of nearly 50% of the over 100,000 harbor seals in British Columbia waters. Despite being officially requested by First Nations-supported groups, the explicit goal is to provide meat for Asian consumers, oil extractives for diet supplements, and by-products for the pet food industry. Commercial fishing interests back the project.

Unwarranted rhetoric about "economic racism" and "equal opportunity" for indigenous peoples cannot disguise the blatant attack upon a protected species for simple commercial gain. The resurrection of the long discredited claims that such "culling" provides fisheries protection to salmon, or will somehow benefit Orcas or other currently popular conservation targets reveals the inadequacy of the marine science behind the proposal.

Coincidentally illustrating the market forces behind this initiative, Chinese poaching gangs have been caught with over 100 harbor seal pups this year alone in the Dalian region of Liaoning Province. Although aquariums are reported to purchase some, the animals have also been harvested for restaurants and medicinal use. Similarly, this is the year that expansion plans for a seal oil capsule factory have been finalized on Canada's east coast, with the popularity of Omega 3 products driving the new demand for seal products. Until now, harbor seals have been exempt from such hunting in that nation's waters and coastlines. 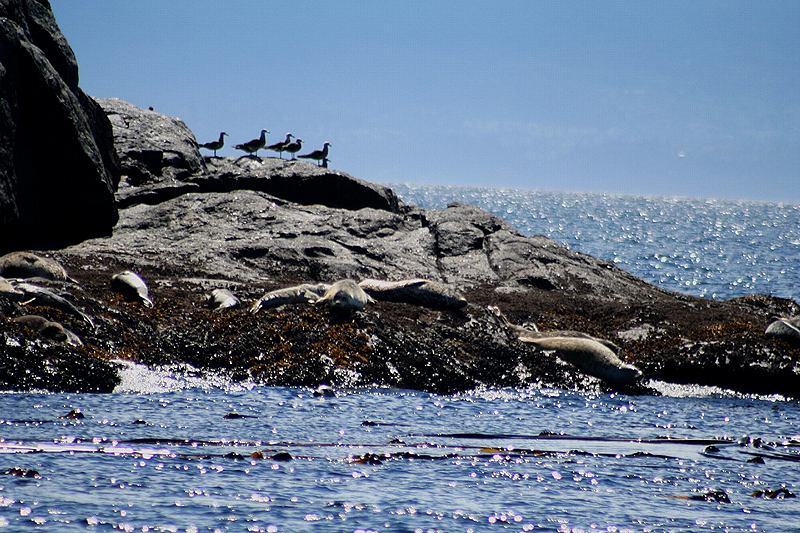 Even though conservation scientists in Iceland ("Ã³mannaÃ° loftfar") and NOAA Fisheries researchers in Massachusetts have used drones to supplement airplane and field surveys to document seal populations, the use of private, non-professional, recreational equipment presents a real threat to harbor seal breeding success. Pup rescue has already been required at the Monterey Bay National Marine Sanctuary as a consequence of drone disturbance, and the scope of the problem is only now becoming apparent.

The large rookery adjacent to the Hopkins Marine Laboratory has been protected behind a chain-link fence for decades, even though it is easily visible from the main tourist road along the Monterey Bay shoreline. The proliferation of hobby drones has challenged that protection. Despite Federal law restricting the operation of drones in National Parks - and they are simply prohibited in increasing numbers of regional and municipal parks - the full weight of the Marine Mammal Protection Act has not yet been brought to bear upon the issue.

"Disturbance" is not a matter of intent, method, or source, but simply a factual question answered by observed behavior. And harbor seal mothers abandoning pups in response to a drone overflight is incontrovertible evidence. 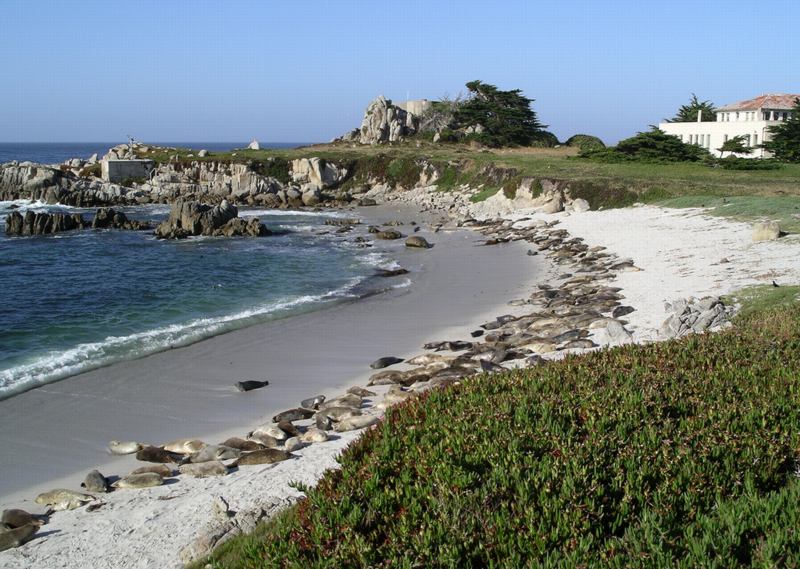 After a two-year study to reduce the protection status of Phoca vitulina in the Hokkaido area from "vulnerable" to "near threatened", Japan's Environment Ministry has begun a capture program to reduce the number of "trouble-making" seals. Initiated in June 2016, it aims to reduce the seal population around eastern Hokkaido by 20% in the next three years. Fishing interests say that seals steal salmon from fixed nets. These are the only Japanese waters where the relatively rare animals are found, and when they were classified as "threatened" in 1998, their numbers had plummeted to as low as 150 individuals. Estimates now are up to 1000, as a result of earlier conservation efforts.

It's likely that economic considerations rather than conservation concerns will determine the target population numbers. The Ministry estimates that even with their measures to ensure "harmonious coexistence of seals and the fishing industry", under the current plan there is a 10% chance that Hokkaido seals will die out in Japan by the next century. Captured pups are currently being taken to aquariums for public enjoyment; it's unclear what the fate is to be of the adults.

For many people concerned with the protection of natural resources, allowing the continuation of intensive aquaculture in the middle of a dedicated marine wilderness was like permitting a Christmas tree farm in Yosemite Valley. Sand bars where harbor seals could rest and bear their young — the largest colony on the California coast — were occupied by bags for raising non-native shellfish.

Divers reported a estuary floor littered with debris, and wildlife researchers offered evidence of disturbance. Nonetheless, a concerted effort to allow the continuation of the commercial activities required executive and judicial action at the highest levels of the Federal government to resolve the issue. 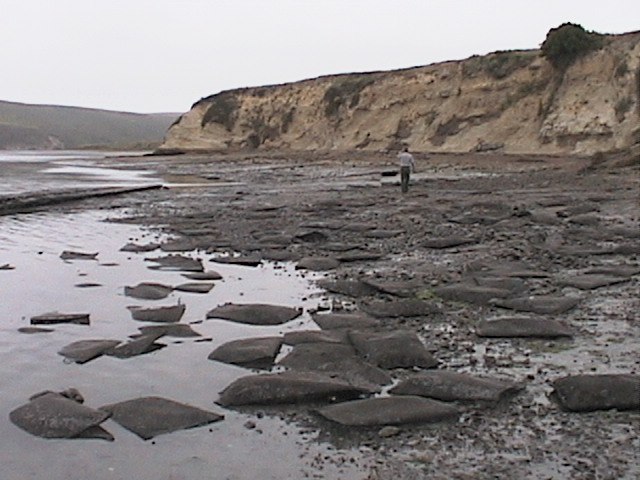 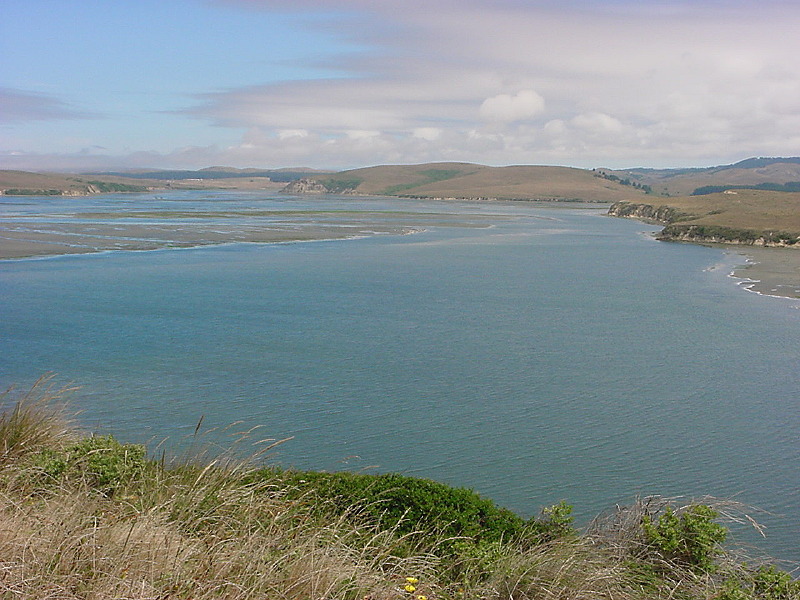 Image from NPS
Used by permission. 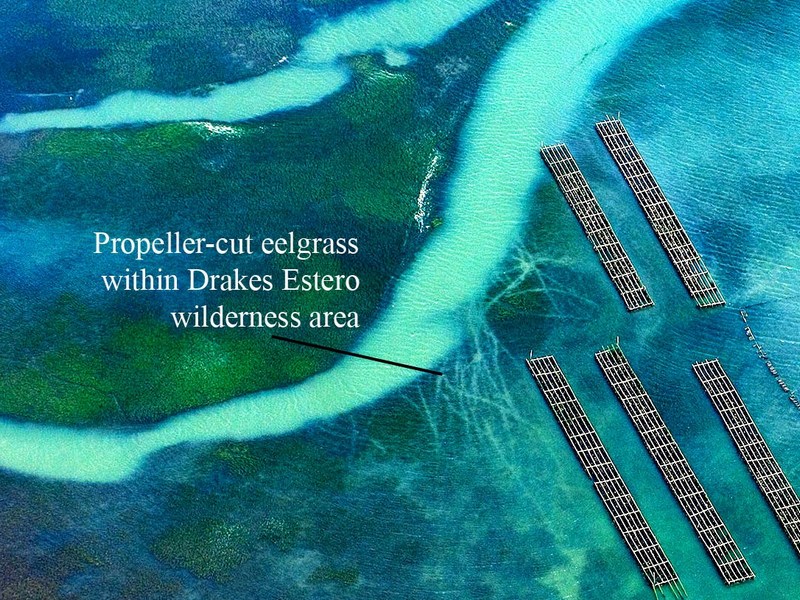 Although the presence of a major harbor seal breeding colony in the heart of a recreation area might seem a positive draw for environmental tourism, legacy uses for swimming, diving,and other watersports have produced a bitter conflict. Documented harassment, disturbance, and deliberate flushing of the colony produced a vigorous response from a succession of volunteer organizations.

Local authorities responded with a protective rope, marking the area where the seals could rest and pup undisturbed, but the harassment continued. As of September 2019, the City Council and the California Coastal Commission have made the final decision including a beach closure during pupping season. 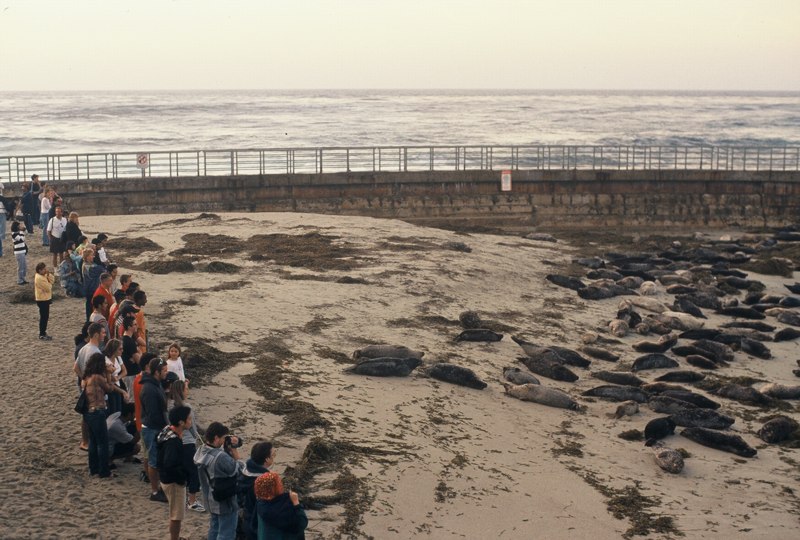 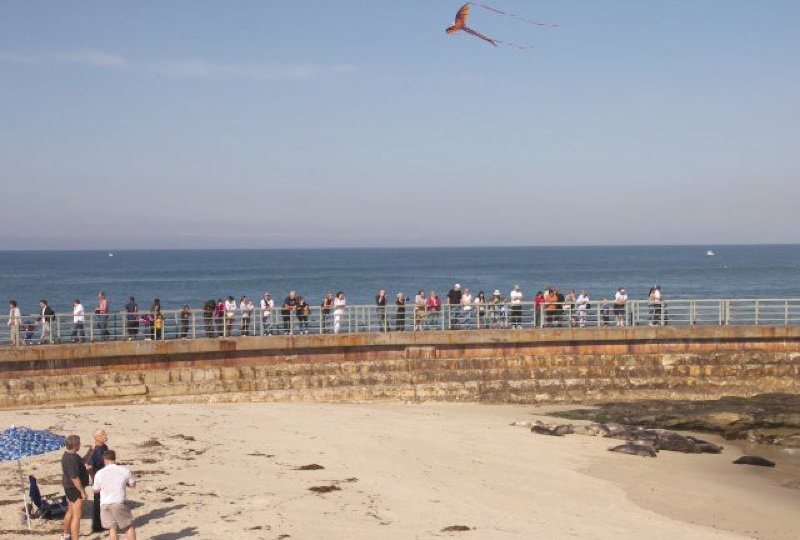 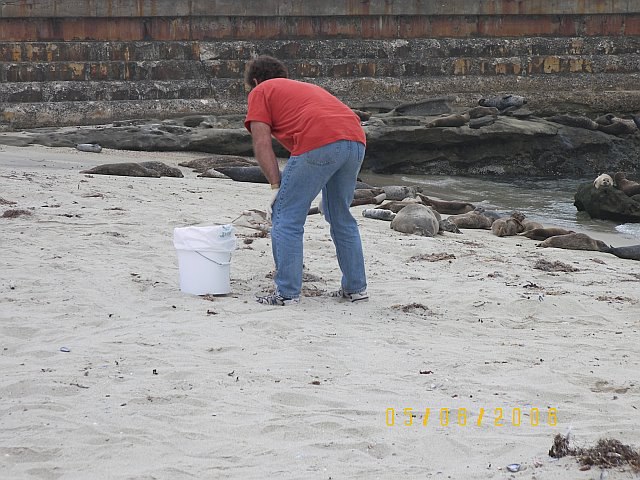 Within sight of the Golden Gate Bridge and the San Francisco shoreline, a colony of harbor seals began to re-establish itself after years of Army and Coast Guard use of the Marin Headlands. Vigilant wildlife observations documented that fishing, diving, and other uses of the cove were serious disturbances to the seals, and that pupping had begun again on the beach. Unfortunately, a plan to declare the area off-limits had stalled, and local education programs were using a steep, hazardous fishing trail to conduct nature study. 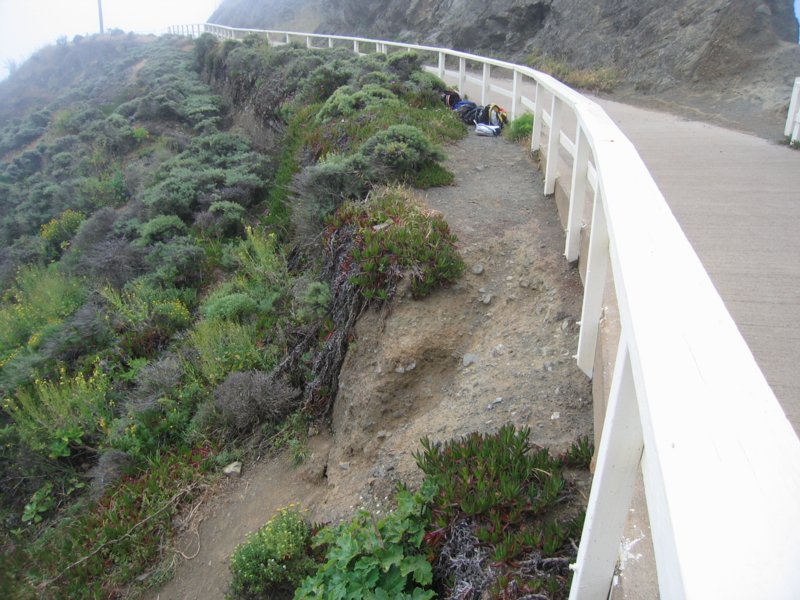 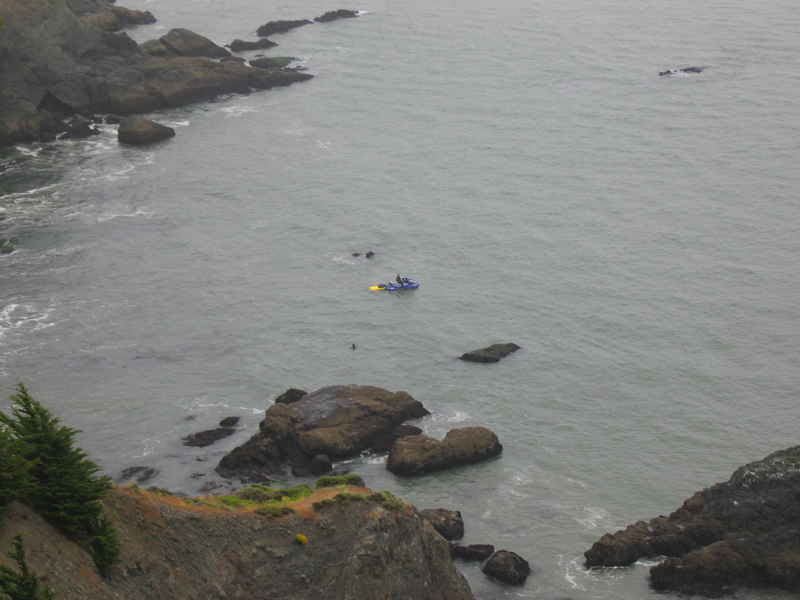 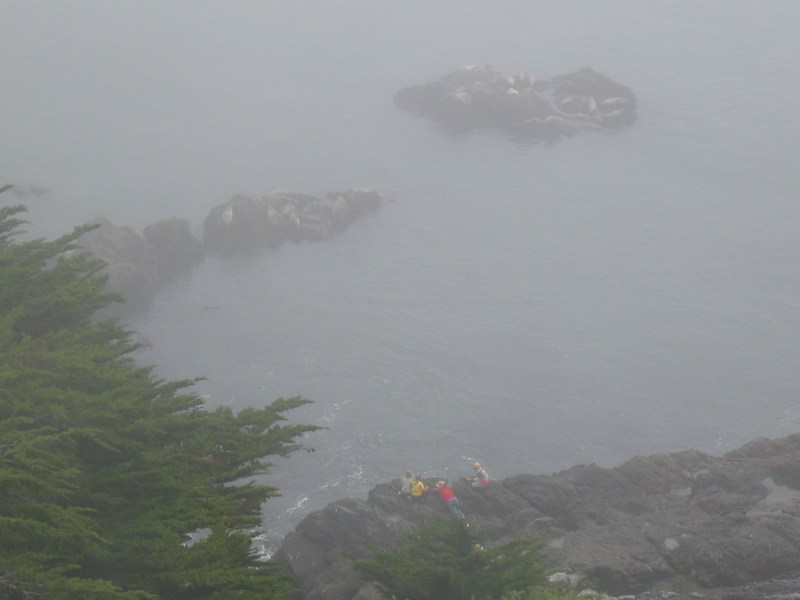 Throughout their range on the populated coasts of North America, harbor seals come into frequent contact with people using waterways and shorelines for sport, exercise, and adventure. The conflicts and problems which arise from these encounters are usually unintentional and even innocent. The startled "heads up", and a flush into the water, are seen as normal seal behavior, rather than the stressful, frightened response to a disturbance.
Oddly, it is the very watercraft that might seem least likely to make an impact - kayaks - that appear to alarm them the most. 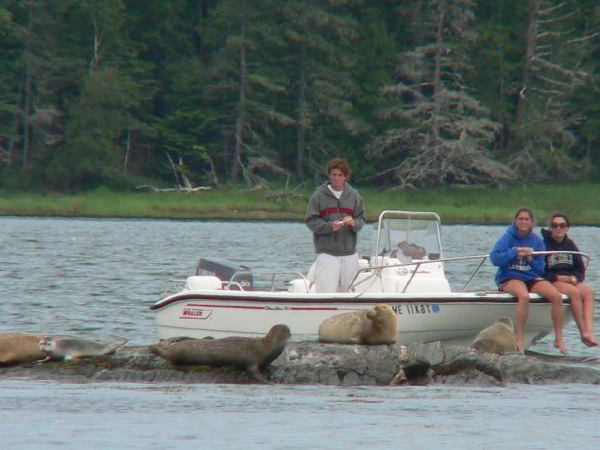 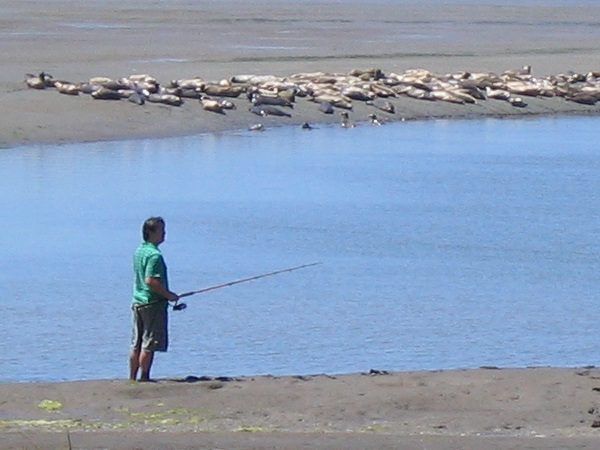 Photo by Yeimaya
Used by permission 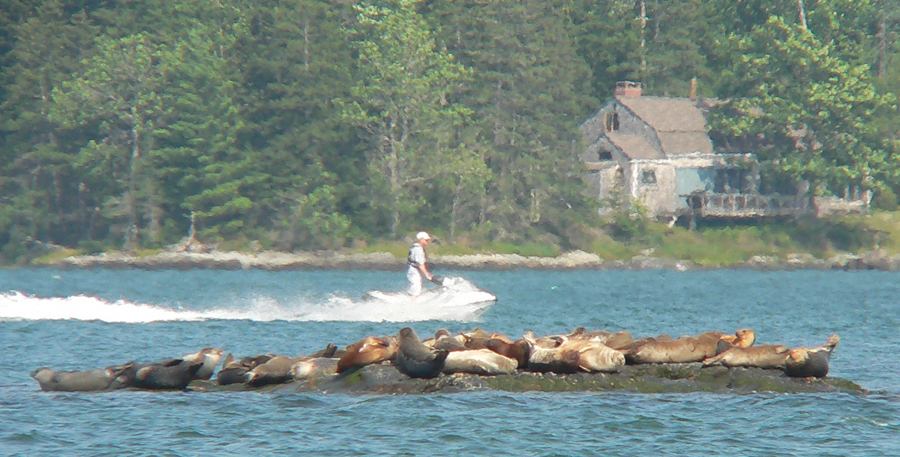 At a time when an Mass Mortality Event has been claiming the lives of over 1000 harbor seals along the US Atlantic seaboard, the news has come that harbor seals in Iceland are at risk of extinction. Not because of disease or pollution, though both are likely contributing factors, but mostly due to a complete lack of legal protection. And a common practice of hunting in the name of fisheries management, according to Iceland Magazine. While populations in other parts of European waters tend to be robust, Icelandic numbers have plunged precipitously, with no more than 7600 animals remaining, as declared (in Icelandic) by the Icelandic Natural History Museum in its newest list of endangered species, released on October 17 of this year.

As SealWatch.org has described in previous Heads Up Alerts, similar management practices vigorously defended by fisheries interests in Western Canada and the United Kingdom potentially would produce the same result. These attitudes and behaviors persist, despite compelling scientific evidence from marine biology researchers that such "culling" serves no economic or environmental purpose!

Scientists at the Sea Mammal Research Unit of the University of St. Andrews in Scotland have found that the hearing of harbor seals could be damaged by offshore turbine construction, which produces some of the loudest man-made sounds underwater.

According to a Scottish Oceans Institute news item, the implications of these findings are that regulators and industry may need to investigate both the reduction of sound levels and the deterenece of seals from risk zones. The abstract of the technical article in the Journal of Applied Ecology has been placed online. 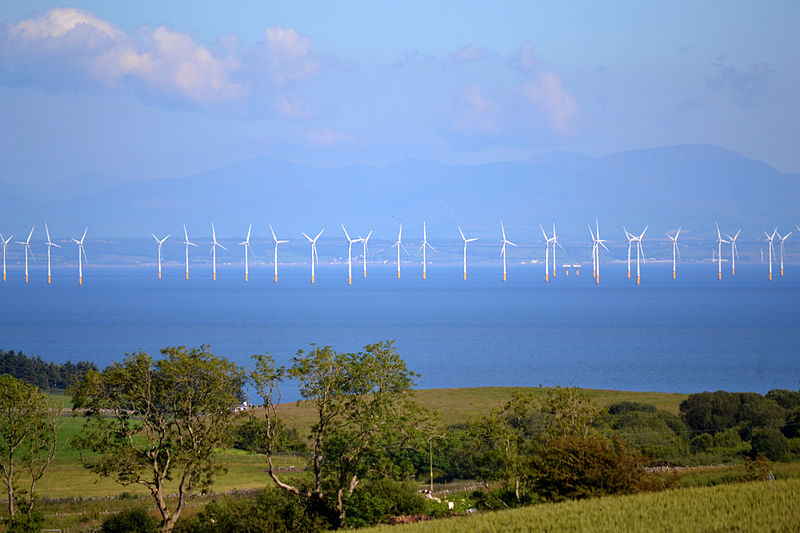 Harbor seals are seen as competitors for fishery stocks in many parts of their range. It has been the practice to permit legal killing of seals to reduce this assumed pressure and allow greater profits in portions of the British Isles. Treated as vermin, the seals are trapped, shot, and snared almost without limit. Although the practice is not limited to the UK — it is known to exist in more remote parts of North America — it is rarely as public and blatant. 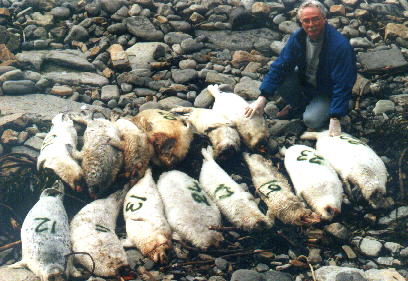 SealWatch.org is dedicated to the general well-being of harbor seals and to vigorous enforcement of applicable law for their protection. Alerts will be posted here of documented instances of continued disturbance or threats to harbor seal safety and habitat. Cheers will be posted when new efforts have been made to extend protection.